5 Women Who had Contributed in the World History

Home About Easywork 5 Women Who had Contributed in the World History
0   
By easywork-ming February 27, 2020 281 Views International Women’s Day has developed into a truly global celebration of gender equality and women’s empowerment. In 2020, the International Women’s Day campaign theme is I am Generation Equality: Realizing Women’s Rights. In short, there is no difference between women and men as we can see, throughout world history women’s contributions were vital as men. Let’s check out 5 Women who have contributed immensely to the World. “What made women’s labour particularly attractive to the capitalists was not only its lower price but also the greater submissiveness of women.” –Clara Zetkin She was a  Polish physicist, chemist and a pioneer in the study of radiation. She developed the theory of radioactivity, invented the techniques of separating radioisotopes, discovered two elements, namely polonium and radium.

“All my life through, the new sights of Nature made me rejoice like a child.” – Marie Curie Mother Theresa, she dedicated everything to the poor, the sick, the orphans, the lonely, the naked, the homeless, and the dying. In 1950, Mother Teresa formed a group within the Catholic Church called the Missionaries of Charity, a place that took care of people who had become a burden to the society, but her action was shunned by many.

She received a number of honours, including the 1962 Roman Magsaysay Peace Prize and 1979 Nobel Peace Prize. She even asked that the money for the banquet be donated to the poor of India.

“We ourselves feel that what we are doing is just a drop in the ocean. But the ocean would be less because of that missing drop.” – Mother Teresa Bojaxhiu

If you watch Night at the Museum: Battle of the Smithsonian,  you will definitely know she played Amy Adams. She was the first American female aviator flying alone across the Atlantic Ocean.

Amelia Earhart wrote the best-selling books about her flying experiences and was instrumental in the formation of The Ninety-Nines, an organization for female pilots. She set a lot of records.

In July 1937, she disappeared during a flight over the central Pacific Ocean near Howland Island. She became an enduring mystery, fueling much speculation.

“Courage is the price that life exacts for granting peace.”- Amelia Earhart 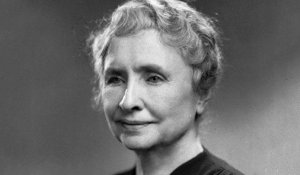 Hellen Keller was a  writer, educator, philanthropist, and political activist in the 19th-century. When she was around 1 year old, high fever caused her blindness and deafness. Later, with the efforts of her mentor Anne Sullivan, she learned to speak and began to communicate with others.

She successfully graduated from Harvard University and was the first deaf-blind person who obtained a Bachelor of Arts. She wrote a total of 12 published books such as The Story of My Life, Three Days To See, The World I Live In.

Co-founder of Helen Keller International is a global health organization dedicated to eliminating preventable vision loss, malnutrition, and diseases of poverty. She was inducted into the Alabama Women’s Hall of Fame in 1971 and was one of twelve inaugural inductees to the Alabama Writers Hall of Fame on June 8, 2015.

“Keep your face to the sunshine and you cannot see a shadow.” – Helen Adams Keller

Certainly, there are still many more outstanding female figures for us to learn from, who made immense contributions in different fields, pushing the world moving forward. Indeed, women’s contributions should never be underestimated.

Also appreciated to Mom, Sister, Girlfriend/ Wife and any woman who really exist importantly in our life.

For further information, please feel free to drop us an email at [email protected] or read our knowledge base at https://easywork.freshdesk.com/support/solutions/44000390830